This is a sample module published to the sidebar_bottom position, using the -sidebar module class suffix. There is also a sidebar_top position below the search.
Fall 2021

On Tuesday, June 29, for the third day in a row, the quaint town of Lytton, British Columbia broke an all-time Canadian record by reaching a high of 49oC.

Despite this, residents seemed to be in good spirits. “Right now I’m getting a free beer from the mayor of Lillooet,” said Jan Polderman, Mayor of Lytton, in an interview with Global News, explaining that the mayor of the hottest neighbouring town had to buy the other a beer.

Set to the backdrop of the south BC mountains, Lytton boasted an elementary school, a coffee shop, and a charming clock tower that overlooked the homes of its 250 residents. Being the hottest community in Canada was a point of pride for those who lived there.

Nobody saw it coming. The extreme heat had caused such severe dry conditions that fire sped across the surrounding forests with ease, burning 90% of the village to ruin and displacing its residents in a matter of minutes.

Polderman later recounted the traumatic event to BBC Newshour. “At around 5:30, I drove through town,” he said. “There was some light smoke at the south end. Within about

15 minutes, the entire town was engulfed in flames. I was lucky to get out with my own life.”

The fire approached so rapidly that locals barely had time to grab what they could carry and flee. There was so little time that residents could not even go door to door to warn neighbours. Because of this, not every resident made it from the false safety of their homes.

According to the CBC, more than 1,000 people fled Lytton and the surrounding area that Wednesday. “They [the residents] ran for their lives, so I imagine a lot of them are traumatised,” Polderman said, his voice breaking. “It was a very small community, people knew each other. It was a small town, like many other small towns. It’s been devastated.”

Though the RCMP suspected the fire was likely caused by humans, the resulting devastation caught international attention in a year where many fires – whether natural or the result of arson or human error – have spiralled out of control.

Fire is an essential part of forest management, but fire can quickly turn disastrous if the burn escapes control. As the heat waves and the humidity of summer make way for the cool nights of fall, what Canadians faced during this year’s fire season may be both a memory and an indication of what is to come.

According to experts, what we are seeing will only get worse as climate change progresses. “It’s not going to go away,” said Mike Flannigan, a wildfire expert with Thompson Rivers University, in an August 11 interview with CBC.

He added that global action on climate change is needed to meaningfully rein back the fire seasons.

Canada has about 9% of the world’s forests. According to Natural Resources Canada (NRCAN), fire has been a vital ecological component of how forests have existed and thrived through the years. Each year over the last 25 years, about 7,300 forest fires have occurred, burning a total of 2.5 million hectares (ha) annually.

When it comes to forests throughout the country, the moist forests of the west coast rarely see or need fires. However, in south BC and within the Boreal Forest, the opposite is true. There, fires are frequent, driving forest vegetation dynamics. This, in turn, affects the movement of wildlife populations, whose need for food and cover means they must relocate as the forest patterns change.

Fire is especially important when it comes to species such aspen, white birch, jack pine, and lodgepole pine. According to NRCAN, these pioneer species (specimens that arrive first in a newly created environment) need full sunlight to thrive, and are well adapted to landscapes where fires regularly recur.

However, fire can often threaten communities established around affected areas, and it moves fast. Combined with the insane heat that Canadians felt from coast to coast this year and the resulting dryness of the forest and its vegetation, a difficult fire season may have been inevitable.

Forest fire experts also noticed a time shift in the normal fire season. This season was longer than most.

Lynn Johnston, a forest fire research specialist at the Canadian Forest Service, commented on the shift in a July 1 interview with Global News. “We are seeing an increase in fire activity – more area burning, more fires burning, a much longer fire season,” she stated, adding that the season’s start in June was very premature compared to past seasons.

A 2020 article published by National Geographic explains how climate change exacerbates the factors that create perfect fire conditions. Less rain and warmer air temperatures dry the forests and surrounding vegetation. Earth has been continuously heating up since the start of the Industrial Revolution, when humans started burning massive quantities of fossil fuels, releasing carbon dioxide that traps excess heat in the atmosphere.

Additionally, National Geographic reports that climate change has also reduced rain and snow, causing spring to come earlier every year. Less precipitation and snow means an even dryer climate. Other factors also advancing the risk of forest fires include past forest management decisions that have allowed for the build-up of vast amounts of vegetation, and the slow creep of houses and other infrastructure into areas of risk.

In a study published in mid-June and reported by The New York Times, scientists suggested that the world should expect more off-the-charts heat waves in the future, unless drastic action is taken to curb climate change. This study, conducted by Erich Fischer of the Swiss Federal Institute of Technology in Zurich and colleagues, used computer simulations of the Earth’s climate to see how warming affected the likelihood of such extreme heat waves.

The findings indicated that such record-shattering heat waves would be practically impossible in a world that was not warming. As well, results concluded that warming made the heat waves more likely to happen, and that the likelihood depends on the rate, rather than the absolute amount, of over-warming.

The New York Times article stressed this fact, because though global warming started in the 1800s, two-thirds of it have occurred since 1975.

The study also found that if global warming continues at such a rapid pace, the record-shattering heat waves will be up to 21 times more likely toward the end of the 21st century compared with the past 30 years.

Fire will be present in forests as long as there are forests to burn. NRCAN says the ongoing challenge for fire management agencies is how to manage fire to protect human values while still allowing fire to play its important ecological role in maintaining healthy forests.

In the August 12 CBC article, Flannigan said that as fire activity increases, the most critical actions that must be taken include directing resources to protect and support communities during fires, and managing the fuel and dry vegetation around them at the start of the season.

With climate change persisting, these efforts may be a more difficult than anyone can anticipate. 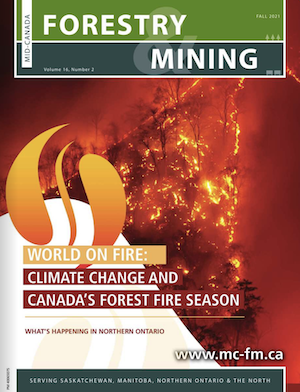