This is a sample module published to the sidebar_bottom position, using the -sidebar module class suffix. There is also a sidebar_top position below the search.
Summer 2022

In mid-April, Alamos Gold held a groundbreaking ceremony for its Island Gold Mine expansion. The expansion will increase production, lower costs, and be an economic engine for the Algoma region, in northern Ontario.

As Island Gold is one of Canada’s highest grade and lowest cost gold mines, and an employer of 20% of the surrounding community, the groundbreaking and subsequent start of Alamos Golds’ Phase III plans are an exciting development to for those involved.

“When we first acquired the Island Gold Mine, we were aware of its potential,” said John A. McCluskey, President and Chief Executive Officer. “It had 1.8 million ounces of mineral reserves and resources, and through exploration investment we have increased this high-grade deposit to 5.1 million ounces of mineral reserves and resources. By further investing in the Phase III expansion, we will more than double the mine life. This mine will be an economic engine for this region for years to come, and positively impact the closest town of Dubreuilville and surrounding communities.”

As Phase III begins, Island Gold Mine states that the number of employees working at the mine will double to 1200 during construction. According to the company’s press release, a study published on the Phase III Expansion outlined a 16-year mine life during which Island Gold is expected to expand from 1,200 tonnes per day (tpd) to 2,000 tpd following the completion of the shaft in 2025. This is expected to drive production approximately 70% higher to average 236,000 ounces of gold per year at significantly lower costs.

Another exciting development includes the addition of a shaft connected to low-carbon intensity grid power in Ontario, which will support higher mining rates with a smaller mobile fleet of haul trucks resulting in significantly lower diesel consumption. This is expected to drive a 35% reduction in greenhouse gas emissions over the Phase III mine life.

“Our government has reduced electricity prices for large industrial customers like Alamos Gold by 15% through our Comprehensive Electricity Plan,” said the Honourable Todd Smith, Ontario Minister of Energy. “We are pleased to support expansions like today’s at Alamos Gold 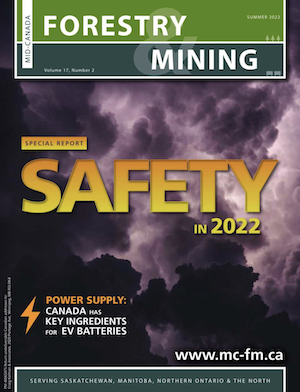